AN EXCLUSIVE CLUB WHERE EVERYONE KNOWS YOUR NAME

Gumley is an aspirational and vibrant school where the development of the whole person is paramount.  The school was established in 1871 and has a long history of educating girls (and boys in the sixth form) who are ambitious, aspirational and motivated.

Gumley House School FCJ was established in 1871 and has a long tradition of educating girls. This Ofsted rated good school also has a co-ed sixth form that, up to now, has not been in the limelight and is not widely known either within the school or beyond the school gates.

When we were appointed to work with the main school on its strategic marketing direction in October 2018, we were made aware of the excellent work that was happening in the sixth form but were conscious that its light was very much hidden under a bushel. We commenced with a research project and the primary aim was to get a full understanding of stakeholder perceptions, particularly in the younger year groups. Our immediate findings highlighted a number of strengths of the current sixth form, including guidance and advice around university choices and careers; teaching and learning and the well-being of students. However, the reasons for continuing to study at Pos-16 were not linked to students making it a positive first choice but more around familiarity.

We combined our online questionnaire with perceptual surveys and ran interviews and focus groups with students from Years 7 to 13. Our findings then led us to conduct school-wide sessions where students were able to design their own sixth form: everything from shaping the sixth form offer to creating its own brand identity – The Sixth. We helped sixth form leaders build on all the positives that were already happening and complemented these by injecting major doses of pride, ambition, engagement, and motivation as part of their development strategies and thereby the marketing plans and campaigns. 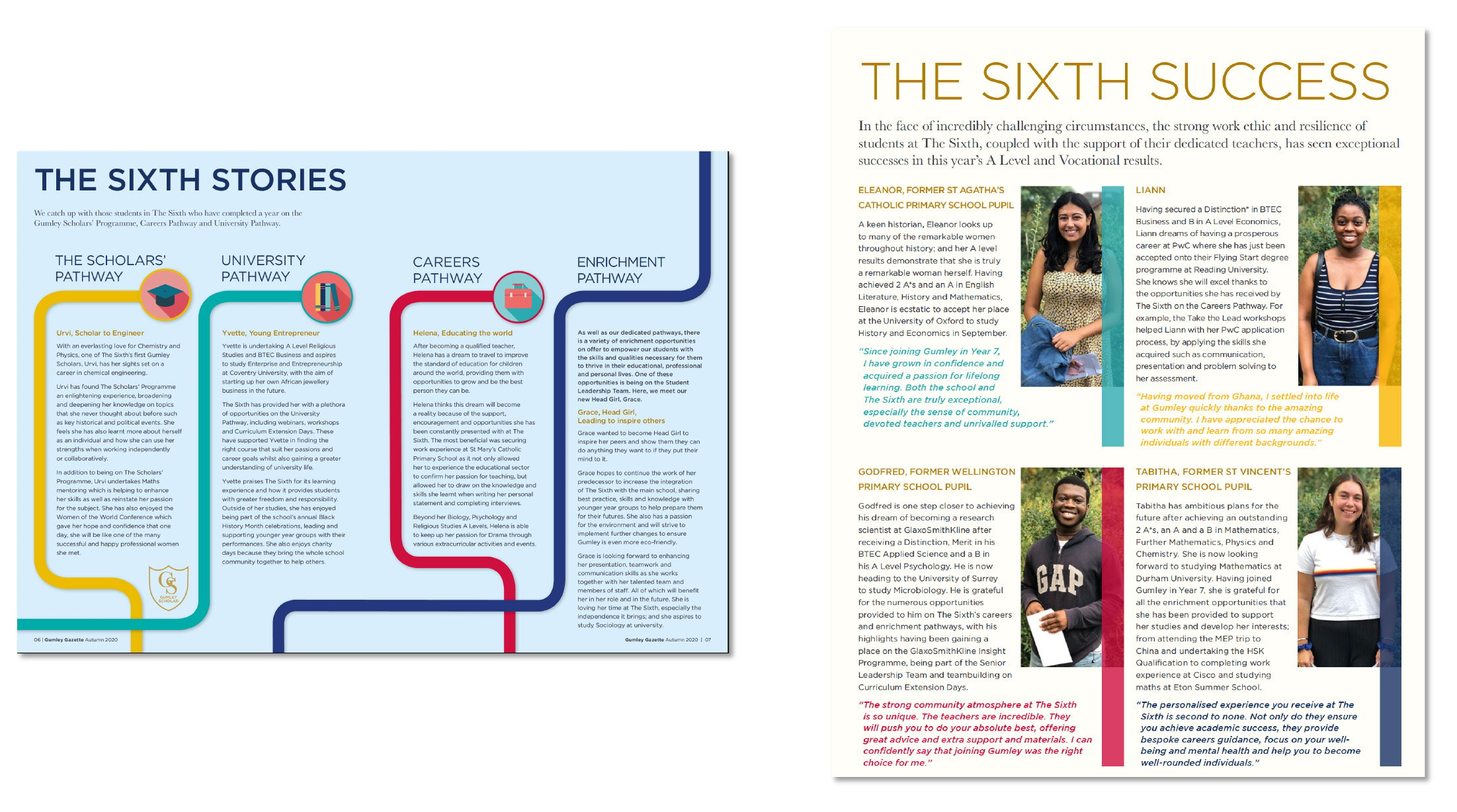 Gumley House students wanted to be part of an aspirational and academic post-16 provision and we knew this had to be reflected in the marketing strategy. These students aspired to be part of an elite membership and as part of the retention strategy we worked on a scholarship programme and reshaping the sixth form offer across a wide range of pathways that provided clarity and greater insight into future careers, university choices as well as success stories of former students. The aim of the marketing project was to raise awareness of the sixth form amongst all students, from Year 7, and to make The Sixth part of a student’s journey in their 11-18 educational career, retaining high achievers along the way and attracting external students.

We weaved a number of key decision-making factors into the sixth form brand and the student experience. The creative journey around the brand alludes to an ‘exclusive’ club that members belong to. A separate logo works seamlessly alongside the main school brand and there is clear brand synergy between the two. Atmospheric photography appears large on communications and features confident students in bright, contemporary settings. Student stories and those of alumni also play a major part in building the sixth form’s brand to showcase the aspirational and ambitious organisation – the aim being to build brand loyalty with students as young as Year 7.

“Our sixth form numbers were diminishing and our own students were not actively choosing to stay on.  In discussion with Grebot Donnelly we knew that rather than imposing a brand image on our staff and students, we had to bring them with us on the journey of raising awareness, changing perceptions and personal ownership of this great sixth form and everything that we had achieved to date.  Every year group was involved in the consultation process, along with staff, and the belief of belonging to an aspirational and academic organisation began to emerge.  Through the development of our separate brand identity from the school, The Sixth, establishing our own set of USPs, and the reshaping of our student offer confidence started to build and we knew we were creating something unique.  GD also worked with us on the development of a range of career pathways, including curriculum and enrichment programmes that were tailored to our students' growing needs.

There has been a real turnaround: perceptions amongst students and staff have changed significantly, and there is a feeling of being part of an exclusive coveted membership club.  Staff are fully engaged and our students are setting the bar high for the younger students to aspire to.  We are delighted with our new brand and the unexpected additional benefits that have been generated.” Anthony Graham, Head of The Sixth